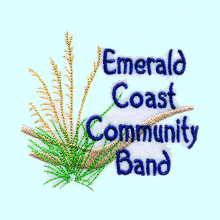 This short video was made during a rehearsal by the Northwest Florida Daily News. It's the same video they refer to in the newspaper article linked below.

When this video was made we were still rehearsing in the recital hall at Playground Music Center which means it was before 2012. One of our cornet players was quick enough to scan the report that came out of this exposure. The report is in two PDF files Here and Here.